SUDBURY–Architecture for Patrick Stewart is a subject of pride. Sitting in his bright downtown office as snow batters the windows, he talks of the communities whose vision for a comfortable space he has helped facilitate, of the students he is teaching how to do the same. He beams when the adjacent hall of studios begins to hum with life as semester-weary students file in to work on final projects. It pulls his attention away for a moment from an otherwise serious topic and suddenly self-aware, he lets out a hearty chuckle that cuts through the tension; creating comfortable spaces is no hard task for him.

Positivity, after all, is something many Indigenous communities are in need of when there is a drain on them otherwise. Architecture not only becomes a way for Stewart and his 14 colleagues and fellow members of the Royal Architecture Institute of Canada’s (RAIC) Indigenous Task Force across the country to represent and address the needs of such communities, but also in order to empower them through the process of creating a space by the people, for the people.

Stewart is one of three RAIC members teaching at the McEwen School of Architecture in Sudbury. David Fortin, a member of the Métis Nation of Ontario and Anishinabekwe Eladia Smoke – KaaSheGaaBaaWeak are using their own experiences in order to shape the definition of Indigenous architect. Fortin is working on a research project about how to define Métis architecture on the Prairies, a task made all the more difficult by the near-contradictory idea of attributing a single definition to an inherently and utterly diverse group.

For Stewart, of the Nisga’a Nation in British Columbia, this is a multifaceted and complex issue to deconstruct. He and his colleagues realize that traditional forms and experiences have their place in design in order to realize this vision.
“This is trying to bring elements of the culture that have been taken away and the success, I guess, of the spaces, I get a lot of response where people tell me that they feel very comfortable,” Stewart says. “With the amount of violence that colonization has brought, to me there’s an opportunity for architecture to be able to provide sort of a good living situation.”

This motivation is reflected in Stewart’s projects across the province of British Columbia, from a community hall for the 400-person Nisga’a village of Gingolx to buildings in Vancouver designed to create a similar feeling of familiarity for those away from home.

There’s a strange symmetry between the 27 bands of the Stó:lō nation required to come to agreement for a senior’s lodge for their elders and the 27 funding partners required to the Lu:Ma Aboriginal Patients’ Lodge in Vancouver to fruition.

In both cases, keeping people in the community is the goal – this could mean changing the situation there to suit the needs of inhabitants or ensuring those forced to move for medical treatment feel at home in what would otherwise be an overwhelming place.

“Architecture has an opportunity to reinforce culture. One of the things in my work that I attempted to do was to privilege Indigenous knowledge so looking at traditional form and trying to bring that form into today.” Stewart says. “I always take my cue from the community.” 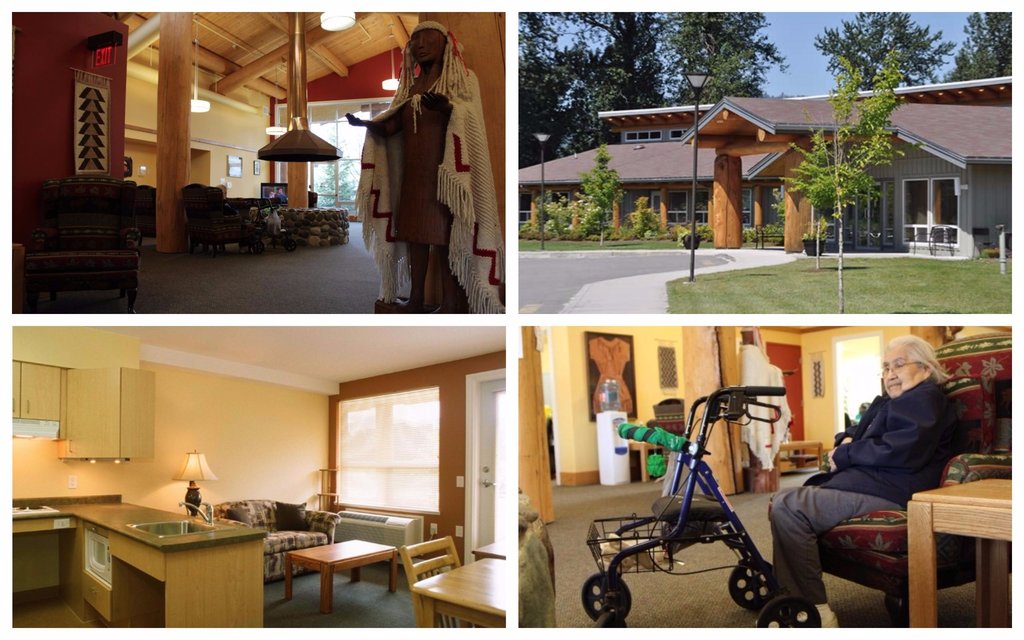 The Stó:lō Elder’s Lodge in British Columbia is one of Stewart’s projects. Hover over the points to learn about the lodge’s design and significance  for the community. (Images: Patrick Stewart, CBC)

The Federal government has committed billions of dollars towards improving community infrastructure in Indigenous communities and promised to better integrate traditional knowledge, but Stewart says there needs to be less of the missionary attitude and more Indigenous representation in all stages of the process.

“There’s now more and more people with skills and education that can lead the way,” says Stewart. “I think the time is coming or has come that Indigenous people need to be able to do it for Indigenous communities.”
While Indigenous architecture can help to alleviate the symptoms of colonization, the current focus is upon deconstructing the structures of oppression in place through legal, educational, and medical representation. As one Nisga’a elder told Stewart: “architecture will come.”

Click to hear Patrick Stewart talk about what elders in his community taught him about patience and how it factors into architecture.

Indigenous architects for the time being may not need a formal definition. After all, helping community members to recognize their own potential as creators regardless of post-secondary education is an important mandate that currently needs to be developed. Architects can impact more than the physical landscape; they can engage a community in facilitating its own vision for the future.

After helping it to realize its inherent power and creativity through building solutions, the pride that comes from ownership of the process and the building that results is a very positive experience. It can give community members a sense of pride that otherwise would be difficult with all of the factors at play trying to push them towards urban centres.

“It’s amazing when you work in communities quite often people don’t know what to expect when we get together, and if we’re designing a building they’ll say: ‘well what do we know?’” Stewart says. “I start soft. I always say, all we need is one good idea and we can build on it. And it snowballs, and it’s amazing. We’re building on ideas and it’s very powerful. People leave energized and they have hope. There’s a future that way.”